Join us every Friday as we launch a new series in partnership with Essence Magazine, called “What Matters.” We hope to focus on African American issues that inspire a broader discussion and “matter” to everyone.

We kick it off this week at the White House, where not one, but two Moms are being honored this Mother’s Day: first lady Michelle Obama and her mom, Marian Robinson. Mother and daughter recently gave their first interview together to Essence Magazine’s Editor-In-Chief Angela Burt-Murray.

Angela joined Tony Harris on Friday to share her experience with the White House moms.

Suitmaker to the President in Jeopardy

Ever notice President Barack Obama’s tailored suits? A lot of people have admired their stylish high quality. The company that makes some of them is Hart Schaffner Marx in Mr. Obama's hometown, Chicago. Chicagoans just call it Hartmarx. It’s been around for 120 years and is the largest men’s suit company still operating in the country.

Well, recently the recession caught up with Hartmarx. Hoping to save itself by restructuring, in January it filed for Chapter 11 bankruptcy. Wells Fargo, the company’s biggest creditor, was said to be considering selling Hartmarx to a company that would liquidate it, even though there were at least two other prospective buyers who wanted to keep the company running.

Union workers at Hartmarx are furious that Wells Fargo would even consider selling the iconic, hometown company to a company that would shut it down. The union and even the state of Illinois are pushing back against Wells Fargo. State treasurer Alexi Giannoulias fired off a letter to Wells Fargo CEO John Stumpf, threatening to take its $8 billion portfolio away from Wells Fargo if the bank backs putting Hartmarx out of business.

Giannoulias is outraged that Wells Fargo got $25 billion in federal TARP bailout money and now might put people out of work. Giannoulias says Wells Fargo has an obligation to use TARP funds to preserve American jobs, not shut down U.S. companies. I spoke with Giannoulias about his hardball tactics against Wells Fargo.

Wells Fargo issued the following statement: "We empathize with the employees and communities affected by decisions made by Hartmarx. However, these are internal business matters that Hartmarx is deciding on, as Hartmarx explores its options in the bankruptcy process. Beyond that, we cannot comment further because our customer relationships are confidential. We work with our commercial customers who experience financial difficulties whenever circumstances prudently permit it. We want them to stay in business so we can earn all of their business and help them succeed financially."

Giannoulias says he’s planning to talk to Wells Fargo this weekend. We will follow up with any new developments on the story. What do you think? Post your comments below.

For months now, Rev. Michael Bernard Beckwith has been telling us not to get caught up in all the bad economic news. This nationally recognized spiritual leader says there are silver linings and positive lessons that can come from economic hardships. But Weekend AM has a story you likely haven’t heard. Specifically, how Rev. Beckwith was able to get his investments out of the stock market just before it plunged. He says the timing was simple – he heard a “voice”. Who’s voice? Was it God? Divine intervention? Betty Nguyen recently interviewed Rev. Beckwith at his home in Los Angeles to find out.

The next week, the stock market took a nose dive. Remember, this is the man we’ve seen on Oprah and Larry King Live ~ talking about faith, not finances. Yet, he says his experience is applicable to us all. Why? Because it focuses on socially responsible investing. We want to hear what you think. Let us know and be sure and join us for Sunday at 7:15 am to hear Betty's interview with Rev. Beckwith.

We CNN folks travel...a lot. Being in Atlanta, we fly out of Hartsfield-Jackson International. And in our mad rush to the airport, we always seem to go through the checklist in our minds: Did I bring enough socks? Where is my driver's license? Is my cell phone fully charged? What is that smell in the back of the parking shuttle?
We notice the beautiful flowers, trees, and shrubs that surround the huge travel hub, but we often take their perfection for granted. We rarely ask the question: Who did all of this? It doesn't dawn on us that someone has to plant the bulbs, trim the hedges, and keep everything green. That someone is Abra Lee.
This weekend Reynolds Wolf will be on the job with Abra, to show the world what it takes to maintain and groom the 5-thousand acres of plant life at the world's busiest airport.

Summer is right around the corner, but we're already getting a taste of those blockbuster movies. The latest Star Trek flick is now playing on the big screen. It's just one of many big films coming to a theater near you this summer. 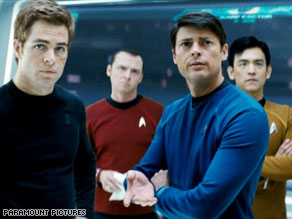 Angels and Demons with Tom Hanks, Terminator Salvation with Christian Bale and Harry Potter and The Half Blood Prince are just a few more of those highly anticipated movies. There’s a lot hype surrounding many of these flicks, and many of us inlcuding myself have high hopes this summer. So which movies will be box office standouts worth the price of admission? Betty gets the scoop from Thom Geier, a Senior Editor at Entertainment Weekly magazine. Personally, I can’t wait to see Star Trek. How about you? What summer movies are you excited about? Tell us. We want to hear from you. Join us in the CNN Newsroom Saturday starting at 6am ET/3am PT.

When times are tough you have to sell your strengths. A North Carolina furniture store produced an advertisement that caught our attention. It uses racial diversity as a selling point and it's getting more than half a million hits on youtube. Kyra is interviewing the producer of the spot at 1:50p. Watch it and send us your comments.

This week is the anniversary of the first American flyboys to officially win the distinction "First Top Guns. " Move over, Tom "Maverick" Cruise.

Despite what we all remember seeing in the 1986 movie "Top Gun," I was reminded this week by historian and "Heroes at War, Heroes at Home" author Zelli Orr that the original Top Guns were Tuskegee Airmen.

Here's the story: on May 2, 1949 members of the first black fighter wing of the U.S. Army Air Corp won the USAF Fighter Gunnery contest at Las Vegas AFB, Nevada.

Congrats to the Top Guns and all others inspired to follow their extraordinary path in the skies and on the ground.

So, that now brings me to this. It's been nearly four months since the Tuskegee Airmen attended the swearing-in of the 44th president of the United States.

And it's been nearly ten months since the Beijing Olympic Games. And what is striking is that during the telling of those recent historic moments, our CNN audience got to know a man very special to me and inspirational to a host of others: my 84-year-old dad, Mal Whitfield.

Almost weekly, (not an exaggeration at all) I get a friendly reminder of how my televised profiles of my dad - a five-time Olympian of the 1948 and '52 games and a Tuskegee Airman gunner beginning in 1943 - touched someone. This is what I hear from perfect strangers who have approached me in the grocery store, at professional seminars and awards events, even one time while working out at my gym: "I loved that story about your dad" or "what an inspiration" and "did your dad see old friends?" and my favorite, which came earlier this week, "seeing that story inspired me to plan a trip with my father."

The backstory as to why I profiled my dad last year leading up to the Olympic Games and during, is this; I wanted my dad to see his Olympic buddies on the 60th anniversary of his first medal wins. After he assured me he physically felt strong enough for the 19-hour journey, without dad's knowing, I contacted his buddies spread out across the country from California to Pennsylvania. Yes, they had plans to be in Beijing. Perfect, I could plan my dad\'s excursion without him knowing his buds would be there. Unaware a beautiful surprise would await, he was just thrilled at the notion of celebrating his Olympic anniversary in a country he last visited as a career American diplomat two decades prior. I had planned only to videotape our journey for our family's viewing.

But colleagues and friends urged me to share it with the world. So, what viewers got to learn along with me, is that octogenarians like dad, gold medalist diver Sammy Lee, gold sprinter and hurdler Harrison Dillard and bronze long jumper Herb Douglas shared a brotherhood and comaraderie that is enviable and everlasting. Together, they individually and collectively proved their muster in the face of so much adversity and resistence. Similar champion characteristics were the ingredients of another cadre of fighters; fighters who were members of that first African-American fighting wing of the U.S. Army Air Corp - the Tuskegee Airmen –which I mentioned at the top.

For the first time, 60 years after their service as pilots and crew in World War ll, approximately 200 airmen all now in their 80s and 90s, were invited special guests at the swearing-in of America's new Commander in Chief, Barack Obama. So, dad was determined to be there, despite threats of below freezing temps. He allowed me, as his escort, to be as inventive as possible to assure his warmth. 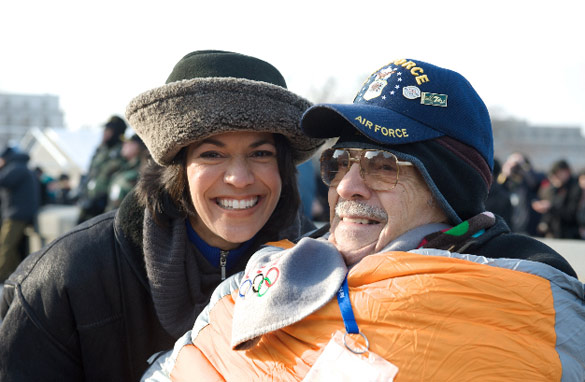 Not at all embarrassed that my scheme meant turning my dad into one hot dog, I enveloped him in a down sleeping bag. Only his face would feel exposure. He was warm, happy and proud - proud to witness firsthand a historic turnaround after serving in a segregated U.S. military.

These heroes like Olympians Mal Whitfield, Sammy Lee, Harrison Dillard, Herb Douglas, airmen Hillard Pouncy, Lee Archer and Ray Williams set the bar for all generations to follow. And it's comforting to know that across all races, gender and ages these heroes are awe-inspiring, appreciated and unforgotten. If there was one thing I was hoping the stories of dad, his fellow Olympians and Airmen would do, it was that it would encourage people to ask their moms, dads, grandparents and any other elders in their lives about the experiences which shaped their lives. If you haven't yet discovered, you'll be pleasantly surprised how their paths will end up shaping yours.

Boast about your Mother!

Just in time for Mother's Day, the Social Security Administration has released its annual list of the most popular baby names in the country.

Not too different than last year's list - though Emma did end Emily's 12-year grip on #1.

Personally, I'm always more interested in the NEW names that crack the top 1,000. Some of this year's newbies on the girls' side: Isla, Milagros, and Dayami; on the boys' side, welcome Aaden, Kymani, and Beckham*.

Does one of your kids have a cool, unique name that might not've made the SSA's list? Or do you just have some thoughts on baby names/trends in the U.S.? Comment!