It’s been a few weeks since Master Gardener Walter Reeves helped me plant a "recession" garden. So far it has been fun; more so than I would have imagined. The kids and I check it every morning. The strawberries took off right away and I have harvested about 20 nice berries! They would have cost me about $4 at the grocery store. The problem is that birds and rabbits are starting to nibble, and I’ve lost about six good berries. Walter suggested putting up a fence and bird netting. I had to go out and buy both, so I’ve added another $15 to my investment. With the help of my husband, we put up a chicken wire fence and made sure to carefully secure the fence to the wood border (that way the critters can’t sneak through the bottom). I will put up the bird netting tomorrow and let you know if it all helps.

Issue No. 2 (and I hate to complain!) is that it has rained nearly every day. The tomatoes look a little wilted and there is some kind of mold growing in the soil. In the coming weeks, we will consult Walter and do a piece on troubleshooting in the garden. E-mail me (jacqui.jeras@turner.com) any topics you may want covered and I’ll try to incorporate some of them into the story.

On a bright note, I’ve picked two bunches of cilantro. I made an awesome mango salsa to top off grilled salmon and gave the other bunch to my photojournalist, Ferre Dollar. And last week I picked some fresh basil and used it for a caprice salad. I only wish I had garden tomatoes to go with it... Give it time!

It’s 6 a.m. on Saturday and my alarm is blaring. Twelve hours from now, I will be at work directing Don Lemon’s shows, but right now I have to drag myself out of bed because I am participating in the Susan G. Komen Race for the Cure in downtown Atlanta. I am not alone. Fifty co-workers and their families are on the Turner Broadcasting/CNN team, and a record 15,000 of my pink-clad “closest friends” will join me, including one thousand breast cancer survivors. 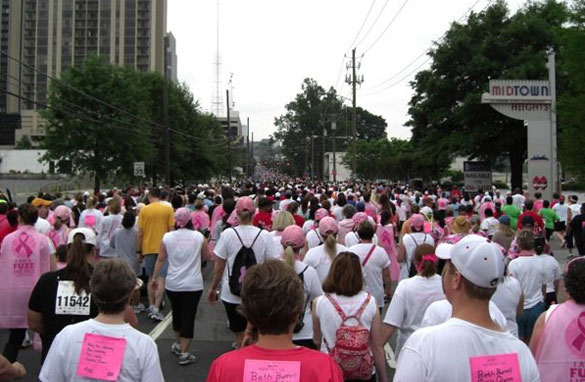 One of those survivors is my wife, Eve Kofsky. Twice.

We all know someone who has had an encounter with breast cancer. In addition to my wife, I have friends who have had it at a young age. Even my uncle has had it. Yes, men can get breast cancer too. At the Race for the Cure, breast cancer survivors are in a special, pampered club. They get fed breakfast and get pink T-shirts and numbers, which signify that they are survivors. At the end of the race, they get pink roses, medals and every one of them is mentioned by name as he or she crosses a private finish line decorated in pink balloons.
[cnn-photo-caption image=http://i.cdn.turner.com/cnn/2009/images/05/10/eve.jpg caption="Eve Kofsky, 2-Time Cancer Survivor"]
It’s a club that makes you feel special on race day, but not necessarily a club you want to be a member of.

So as you celebrate Mother’s Day this year, take a moment to think about all of the brave people out there who are battling breast cancer or have survived it. The Atlanta walk raised over $1.5 million towards the fight against the disease. We can only hope that some day a cure will be found. Then I can go back to sleeping late every Saturday of the year.

In Washington there's a small, but growing caucus on Capitol Hill. Mom's who are juggling the demands of daycare and diapers with committee meetings and votes.

The Capitol Hill Moms and many across the country may be getting an extra "Thank you" from their families on mother's day. The reason? The recession.

According to the labor department, more women than men are holding onto their jobs. But why?

Actor Kiefer Sutherland has been charged with misdemeanor assault after he was accused of head-butting fashion designer Jack McCollough at a Manhattan nightclub.

No, it wasn't a scene out of '24.' Reports say the shows star was defending actress Brooke Shields.

But could the clock be ticking down his time as a free man?

Star Trek has gone warp speed at the box office. It's raked in 31 million dollars in US ticket sales after just over a day in theaters.
Jason Carroll - a bona-fide "Trekkie" - tells us what the hoopla is all about.

Why has this franchise been loved by so many for so long?

If you miss Mother’s Day, you know you’re in trouble. Thank goodness I’ve never missed sending my mother a gift. She would have my hide.
[cnn-photo-caption image=http://i.cdn.turner.com/cnn/2009/images/05/09/don1.jpg]
[cnn-photo-caption image=http://i.cdn.turner.com/cnn/2009/images/05/09/don2.jpg]

But as I picked up the phone to order flowers for my mother this year I wondered: Can people really afford to send flowers and other gifts when the economy is so bad? My producer and I made some calls and we ended up going out for a Mother’s Day delivery run with the FedEx man. Interesting what we found out. Take a look...and Happy Mother's Day!