Like it or not, it seemed like everyone was talking about Carrie Prejean today.   After she hit a nerve by defending her position against gay marriage during the Miss America Pageant, controversy and semi-nude photos followed.  Donald Trump held a news conference and said Miss California can keep her crown.    Some of our Superstar iReporters sounded off on the Miss California controversy. Check it out: 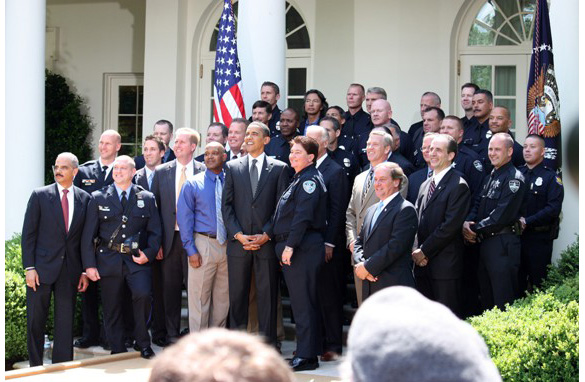 When we went live to the Rose Garden for today's ceremony, we promised you a list of the men and women honored. Here it is - details, courtesy of the White House:

Case: On April 27, 2008, a man started shooting at a crowd in a movie theater parking lot, while using the mall security guard as a shield. After an unsuccessful attempt to get the man to drop the gun, Officer Fabian Gonzalez shot the offender, freeing the security guard and preventing any harm to civilians.

Case: On February 7, 2008, the LAPD responded to a report that a distressed man killed his family, was suicidal, and had hostages. When the SWAT team arrived at the residence and initiated a forced entry, the man opened fire, hitting two officers – one of them fatally.

As this ensued, officers provided sniper cover from the roof, which enabled the offender’s wife to safely flee the hostage situation. At this point, the suspect fired upon the officers, who were forced to take him down.

Case: On October 22, 2008, a Palm Beach resident who had been denied access to his vehicle by a tow truck operator, violently attacked workers in tow shop.

By the time Deputy William Badala arrived on the scene, the offender had fired shots with an assault rifle, striking two workers. The angry customer returned to his SUV as Deputy Badala approached. The customer retrieved a loaded AK-47 from his car and aimed it at the Deputy. After an extended shooting match, Deputy Badala shot down the suspect.

Case: On April 7, 2008, Officer Dorminey McCrae was dispatched to a retail store where a man held a 16-year-old female hostage at gunpoint. Officer McCrae slipped into the store unnoticed, and transmitted information over radio without being detected. As the suspect attempted to escape, police officers arrived and blocked all exits. Officer McCrae took careful aim and disabled him with a high risk shot, saving the young hostage.

Case: On August 25, 2008, Officers Chris Davis and Jason Rose were two of the first to respond to one of the most damaging fires in Boise history. The officers stormed from house to house, evacuating residents. Both officers were engulfed in flames after a series of explosions. Fire melted their uniforms; they were knocked down by the force of the blast, and reduced to using sprinklers to put out the fire on their own bodies.

Both officers continued to work on a mission to save as many people as possible, despite their injuries. As a result, there was only one fatality in what could have been a much greater disaster.

Case: On August 25, 2008, Officer Timothy Gramins gave chase after an armed man attempting to escape a bank robbery. The suspect abruptly started shooting in a crowded street. Under a barrage of gunfire, Officer Gramins protected onlookers, without regard to his own life, and took down the suspect.

Case: On October 20, 2008, while off duty, Deputy Rhonda Goff saw three men covered in blood, coming out of a bar. She investigated and called for backup and medical assistance.

Although outnumbered three to one, she confronted the suspects, handcuffed them, and found numerous stolen wallets in their possession. When backup arrived, they found four more wounded victims inside the bar, then discovered three more men had been involved in the robbery.

Deputy Goff quickly obtained a license plate number from a witness and put it on the radio, enabling detectives to track down the remaining robbers before they could flee the area.

Case: Officer William Darnell arrived at a victim’s apartment building after receiving a domestic violence call. As Officer Darnell searched the building, the perpetrator shot him in the face and escaped up a flight of stairs.

Despite tremendous pain, the officer was able to hit the emergency button on his radio to alert dispatch, and managed to drag himself into a position to return fire. Another officer arrived and helped Officer Darnell to bring down the suspect.

Case: On December 31, 2007, while responding to a burglar alarm, Officers David Loar and Christopher Skinner found a homeless man named Harold sleeping in an underground parking garage. These two cops, using personal time and money, helped Harold get back on his feet. They helped him secure housing, furniture, obtain a copy of his birth certificate, a new Social Security card, a checking account, and a new state I.D. In addition, they ensured Harold was receiving Medicare benefits, his Social Security pension, and discovered that he qualified for a lump sum back-paycheck.

These officers did everything they could to help a man restore his dignity and livelihood, and are an exemplary model of officers going beyond the call of duty in their service to the community.

Case: While off duty and on his way home from the hospital where his wife had just given birth to their son, Officer Brian Freas witnessed a violent car accident on the highway. Both vehicles involved in the collision were perched at the edge of a 40-foot dropoff. Struggling to get out of the car, the occupants shifted their weight and caused the vehicle to tip toward the edge.

Officer Freas pulled aside and rushed to the scene. He applied his full weight to steady the SUV, while he helped the occupants out of the vehicle. He then rescued the other car’s occupants. Due to the Officer’s swift action, there were no fatalities or life-threatening injuries.

Case: This group of Special Agents planned a five-year undercover operation to bring down renowned terrorist Monzer Al Kassar, a man responsible for supplying the weapons that were used in the 1985 Achille Lauro hijacking.

The special agents infiltrated Kassar’s circle of associates by posing as representatives of the Colombian drug trafficking group known as FARC. As FARC members, they pretended to seek modern-day weapons. Kassar was tricked into believing he was meeting with a high-level FARC commander, and was arrested in Spain on U.S. charges. Two associates were arrested in Romania, where they had traveled to receive what they believed was payment for weapons.

On November 20, 2008, a U.S. jury convicted these defendants on multiple terrorism charges.

OK...maybe he wasn't, as he insisted to Kyra today.

But we're still real fond of this pic our friend Dave put together on the fly. (Thanks DJ!)

The Class of 2009: they're graduating, checking facebook for incriminating photos of the keg party or the bellies at the bar, changing e-mails from "dizzy miss izzy" to something a little more professional and they're looking for a job. Here's The 30 Second Pitch: College edition.

He worked narcotics in the Bronx, no easy beat. But nothing like the dangers of Afghanistan.

NYPD Officer Deon Taylor was on his second tour there with the National Guard.

The man who once played with G.I. Joes, and defended the other kids from bullies - no match for an IED.

In a way, though, he's still protecting the streets; he encouraged his brother and four cousins to become police officers too.

Survival of the Fittest

Elisa Gambino is a small business owner who lost a third of her business when recession hit.
So she rolled with the punches, got creative and began driving the pasta to the people.

On Friday– we'll bring you the story of the "Sweet Auburn Bread Company". Baker Sonya's sweet potato cheesecake became famous when President Clinton sampled it. But the recession took down a lot of her business. Now she too is rolling with the punches– and getting inventive.

The stress of war: helping our troops cope

A U.S. soldier is accused of killing five of his fellow troops at Camp Liberty near Baghdad. The soldier, identified by the military as Army Sgt. John M. Russell, is now charged with five counts of murder and one count of aggravated assault.

That disturbing and tragic event has a lot of us thinking about the stress troops face, and the issue of post-traumatic stress disorder.
While we don't know exactly what may have triggered the attack at Camp Liberty on Monday - and we don't know if Sgt. Russell was suffering from the disorder - we do know that PTSD is real, and many troops have it.
What triggers PTSD? And how do we support our troops coping with the scars of war?
Heidi Collins talked with our chief medical correspondent Sanjay Gupta, and Iraq war veteran Patrick Campbell.
Here's that interview:

See Heidi in the Newsroom, Monday through Friday 9a-11a et.

He defended us here, on the Lathrup Village, Michigan police force - and abroad, in the military.

Officer Matt Hilton gave his life for what he believed in.

He was killed last year in Afghanistan, while serving with the Michigan Army National Guard.

His home state honored him with a memorial coin this past weekend. And we honor Officer Matt Hilton as part of our focus on National Police Week.

[cnn-photo-caption image=http://i2.cdn.turner.com/cnn/2009/SHOWBIZ/05/11/twitter.comedians/art.comedian.gi.jpg caption="John Heffron is one of an increasing number of comedians joining Twitter."]
To make it as a comedian these days, you don't just need to be good on stage and screen. You also have to nail the art of sending out mini-messages to Twitter "followers." How do standup comics do that? CNN’s Josh Levs spoke with 2 pros – John Heffron, a winner of “Last Comic Standing,” and Craig Shoemaker, who won the award for funniest comedy routine on XM Satellite radio.

His sergeant was down, wounded by a gunshot. The bad guy was still pulling the trigger.

But without a second thought - Officer Matthew Medeiros rushed out, got between his sarge and the shooter, and fired back.

For this act of heroism and selflessness, the Boynton Beach, Florida Police Department just awarded its first Medal of Valor to Officer Matthew Medeiros.

We honor him, as part of our team's special focus on National Police Week.