Thou Shalt Not Come Unarmed

Take the 10 Commandments plus the 2nd Amendment, and what've you got?

Pastor Ken Pagano - who joined Kyra on the phone from Louisville, Kentucky.

It was a busy day in the CNN Newsroom as we replayed President Obama's Cairo speech in the 11a ET hour. We asked for your reaction, and a lot of you sent comments to the blog page - thanks for your contributions. Here's a clip from the program, as Muslim Americans talk about the key moments of President Obama's speech.

The 65th Anniversary of D-Day

Looking ahead to this weekend in the CNN Newsroom with Betty Nguyen and TJ Holmes...

President Barack Obama and the first family will be in France for the 65th anniversary of D-Day - marking the Allied invasion of Normandy to fight Nazi Germany during World War II. We will air President Obama's speech in its entirety in a special hour dedicated to D-Day.

Josh Levs takes us on a virtual tour of one of the most fascinating web sites he says he's EVER seen - a site that takes the viewer inside D-Day.

Whether you’re an expert on that critical moment in history or know nothing about it, Josh says you’re going to be struck by this interactive site, packed with video, photos from the front, sound from the President, and more.

Join TJ, Betty and Josh in the CNN Newsroom Saturday and Sunday beginning 6am ET/ 3am PT.

"These are our sisters and brothers..."

'For better, for worse', that's the stance of a California pastor opposed to Proposition 8. Reverend Art Cribbs joined Kyra live from Los Angeles.

(By the way, if you'd like to read more about Rev. Cribbs, found an interesting article here.) 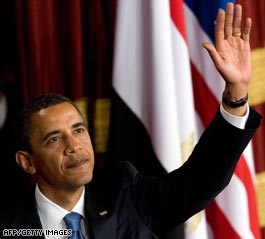 President Barack Obama delivered his long-awaited speech this morning on American and Muslim relations, tackling an array of issues. Among conflicts the president cited: the wars in Iraq and Afghanistan, women's rights, economic development, religious freedom and democracy in the Muslim world.

We will reair a large portion of the speech at 11am ET, but we also want to hear from you. What did you think about President Obama’s speech?
Leave us a comment and we’ll share some of them on air in the CNN Newsroom - 11am – 1pm ET.

What did you think?
Post your comments below. We'll read some of them on air.

Inside Dr. Gupta's Other World

(Note you can watch part 2 of Dr. Gupta's "Inside the Operating Room" Friday on our show. Until then...here are some great behind-the-scenes details from part 1.)

I wasn’t sure what to expect as I waited outside the employee parking lot of Grady Memorial Hospital Monday morning. My assignment for the day? Produce a story on Dr. Sanjay Gupta’s life outside of CNN – his life as a trauma neurosurgeon. For the past three years I’ve been producing stories for him – but this time HE was my story.

He greeted our crew a little before 5 a.m. with a familiar smile and diet soda in hand. Wasting no time with chit chat, he scurried into the hospital, quickly changed into scrubs, then was off to his “home away from home,” O.R. 14. He had three cases scheduled by the time we arrived – a brain surgery and two spinal fusions.

First up – clipping a ruptured brain aneurysm. Watch the video from inside his operating room by clicking here.

My heart raced as I stood on pins and needles watching a critical part of the operation, during which the patient had an interoperative brain bleed. As Sanjay says, “I always like to tell people we spend 99% of our preparation on the 1% of things that happen.” Sanjay’s team didn’t flinch. They knew she’d be losing a liter of blood in just seconds and to prevent disaster, they raced to stop the bleed. Mission accomplished. It was a scary 90 seconds for a bystander like me watching it all go down, so what really struck me was how calm and focused his team was the entire time.

“When you have an aneurysm rupture like that and you are losing a liter of blood over several seconds, it makes any TV live shot you've ever done look not that scary. I know if I don’t get that thing stopped within a couple of minutes, the patient won’t survive,” he explained.

No doubt their neuro team is a well-oiled machine. It was especially fascinating to watch Dr. Gupta interact with his residents. “Many of my residents have never done cases like this so I get to show them for the first time how to do these procedures, which is pretty interesting for me and for them,” Sanjay said. Between critical moments in the O.R, they chatted like comrades. Everything from rock concerts, to their love lives to real estate – joking around like old friends.

One thing that is “very important” during surgery: the music. I watched as they took turns flipping through the iPOD. Dr. Gupta gave me his ultimate playlist for brain surgery: open with Gipsy Kings or Rise by Eddie Vedder and close the surgery with Coldplay’s Viva La Vida or Mr. Brightside. Solid picks, doc!

The morning flew by fast. By 10am, Dr. Gupta and his team had already saved one life. By 10pm, that tally was up to three. Overall, it was incredibly exciting to not only see a whole other side of Sanjay on the job, but also see inside the human brain!

Want to see more in the weeks to come? Follow Sanjay on twitter. He posts cool pics each week from the operating room!

5:03 am ET December 1, 2022 RETWEET
RT @CNN: CNN's @Ryanyoungnews reports on the severe weather that killed at least two and damaged structures across Mississippi and Alabama.…
cnnnewsroom

3:48 pm ET November 29, 2022 RETWEET
RT @CNN: "We're not going to back down though, on our fight to give families breathing room," President Biden said. The Biden administratio…
cnnnewsroom