[cnn-photo-caption image=http://i2.cdn.turner.com/cnn/2009/SHOWBIZ/TV/06/25/obit.fawcett/art.fawcett.portrait.gi.jpg caption="'70s icon turned serious actress Farrah Fawcett passed away Thursday at age 62 after battling cancer"] She had a million megawatt smile that set male hearts aflutter as they hung her iconic swimsuit poster on their bedroom wall and a fabulous head of hair that sent a generation of women scurrying to the salon to copy her winged 'do.

Actress and artist Farrah Fawcett has died after a very public battle with cancer. Share your memories of the "Charlie's Angel" who went on to garner award nominations for serious roles in "The Burning Bed" and "Extremities." Post your comments below or send us your thoughts in an iReport.

Hate Crimes Bill: What do you think?

The law would also allow the Justice Department to assist state and local authorities in the prosecution of hate crimes.

What do you think? Should this hate crimes bill be passed? Let us know here or tweet us @KyraCNN

At 2:30pm today Kyra Phillips with interview the parents of Matthew Shepard in the CNN NewsRoom.

Find out more about his parents' work through the Matthew Shepard Foundation on their website.

President Obama is trying to gain traction on his domestic agenda, including health care reform. But international events keep grabbing the spotlight: Iran's crackdown on post-election demonstrations, North Korea's nuclear saber-rattling. How can the President best balance U.S. interests at home and abroad? Is he already striking the right tone? Leave us your comments below.

New York (CNN) - Students at the Harlem Children's Zone are no strangers to challenges. The teenagers at the renowned not-for-profit school have grown up in some of New York's toughest neighborhoods – neighborhoods troubled by crime, poverty, and disease. But they've been fortunate recipients of help from their community. And now, they want to give back by reaching out to youngsters facing extreme difficulties of their own a continent away in the Democratic Republic of Congo. 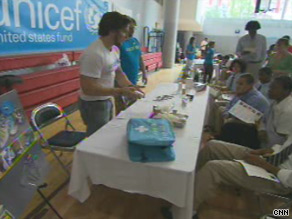 120 students joined U.S. U.N. Ambassador Susan Rice and members of UNICEF (The United Nations International Children's Emergency Fund) this Monday to kick off President Obama's "United to Serve," a program encouraging Americans to give back to the less fortunate.

Rice told the students that their generation "will have more to do with people in other countries than any other generation in our history." She went on to tell them, "Your success…will depend to a great extent on your ability to work with kids and people in other parts of the world."

The students at the Harlem Children's Zone are doing their part by assisting in the donation of material items to students displaced in the Democratic Republic of Congo (DRC) while learning specifically about the struggles their counterparts face. Tempestt Tucker, a student at the Harlem school, expressed that she and her fellow students wanted "to help them... get rid of diseases and not be hungry."

Ambassador Rice gave the children a rudimentary course on the work done at the United Nations, and explained the current conflict in the Democratic Republic of Congo (DRC), where ethnic Hutu and Tutsis have been warring over natural resources and territory. Tens of thousands have been killed and left homeless.

The students were able to sit in an "interactive classroom" to learn about different emergency need items they could select on behalf of their school as donations to refugees in the DRC by UNICEF. The items the students were allowed to vote on include basic family water kits, vaccines, first aid kits, protein biscuits, anti-malaria mosquito nets, and sporting equipment.

Students at the school expressed concern for the situation in the DRC after learning about the death and destruction in the region. Globalissues.org lists 47 percent of deaths in the DRC have been children.

"I'll do whatever it takes to help those people because they need help," said Catherine Pabon, said a student at the school.

UNICEF says that it has helped to distribute tens of thousands of plastic sheets, bucket and blankets, and more than one million water purification tablets to displaced people from the DRC.

Harlem's Children Zone began in 1970 as Rheedlen, as the city's first truancy-prevention program. According to the website, Harlem Children's Zone offers innovative efficiently run programs that are aimed at breaking the cycle of generational poverty.

If you would like to choose your own UNICEF inspired gift and learn more about the numerous organizations working to help children in the Democratic Republic of Congo and around the world, please visit Impact Your World.

The shroud of mystery around South Carolina Governor Mark Sanford's absence has been lifted, to reveal an ugly truth: the Governor was having an affair.

Sanford came back to the Statehouse in Columbia, to tell the world about his transgression.

Turns out he had been having affair with a woman in Argentina, something his wife says she knew about for several months.

She admitted that she asked him to leave a couple weeks ago, but thought the trial separation would be a way to strengthen their strained marriage.

That notion may have ended with his unexplained absence.

Turned out he wasn't hiking along the Appalachian Trail.

He was in Buenos Aires with "Maria."

Sanford was a rising star among Republicans, with an eye toward possibly running for President in 2012.

Now, he's resigned as head of the Republican Governor's Association.

His admission is becoming all too common.

Republican John Ensign is still in the Senate and Mark Sanford is still running the show in South Carolina.

Coming up at 10am ET in the NewsRoom with Heidi Collins, we'll talk with the Political Editor of The State newspaper.

The State broke the story of Sanford's Argentinean getaway.

We want to know what you think: should Sanford stay or go?

5:03 am ET December 1, 2022 RETWEET
RT @CNN: CNN's @Ryanyoungnews reports on the severe weather that killed at least two and damaged structures across Mississippi and Alabama.…
cnnnewsroom

3:48 pm ET November 29, 2022 RETWEET
RT @CNN: "We're not going to back down though, on our fight to give families breathing room," President Biden said. The Biden administratio…
cnnnewsroom