Learn CPR to Save Someone in Cardiac Arrest

Dr. Kenneth Rosenfield, an interventional cardiologist at Massachusettts General Hospital, once had a patient whose life was saved because the man had a quick-thinking wife who knew the rhythm to the song “Staying Alive,”

The couple were taking a walk in the woods last year when he, like Michael Jackson, suffered cardiac arrest and collapsed. The man’s wife called 911, and then performed CPR on her husband for 15 minutes until the ambulance arrived.

“She saved his life, and when I asked her how she knew how to do CPR, she said she’d heard a one-minute spot on the radio from the American Heart Association that said to push very hard, 100 times per minute, to the tune of “Staying Alive,” Rosenfield says.

Getting CPR within minutes is crucial for someone who’s suffered from cardiac arrest, as brain death and permanent death start to occur just four to six minutes after the heart stops. More than 95 percent of cardiac arrest victims die before reaching the hospital, according to the AHA.

If more people knew CPR, many of these lives could have been saved, Rosenfield says. “I’ve had four or five patients saved by bystanders in the past year. It’s remarkable.”

Some of these lifesavers – like a high school senior who performed CPR on a man who’d collapsed in a clothing store – were trained in CPR. Others, like the woman who saved her husband, had no training but had heard the basics.

CPR is much easier than people think, Rosenfield says. “You should take a class, but it’s easier than it used to be. There’s no mouth to mouth. You push on the chest very hard and don’t worry about breaking a rib.”

The University of Washington has this video on how to do CPR. You can find a CPR class in your area on the websites of the American Red Cross and the American Heart Association.

In 2007, a bill named for Matthew Shepard was introduced in Congress. Two years later, and more than 10 years after his murder, lawmakers are still debating if they should expand federal hate crimes protections. Matthew's parents, Dennis and Judy Shepard, joined Kyra live in the NewsRoom.

You can find more information on The Matthew Shepard Foundation at matthewshepard.org.

CNN's Don Lemon on location in Los Angeles, outside the coroner's office, where an autopsy of Michael Jackson is under way. Don pans his camcorder up and down the street to give everyone a sense of the media presence.

It's an attention-getter, that's for sure. This editorial cartoon in the Atlanta Journal-Constitution tackles Michael Jackson's troubles head-on. Cartoonist Mike Luckovich joined us in our 1pET hour Friday, to talk about it. 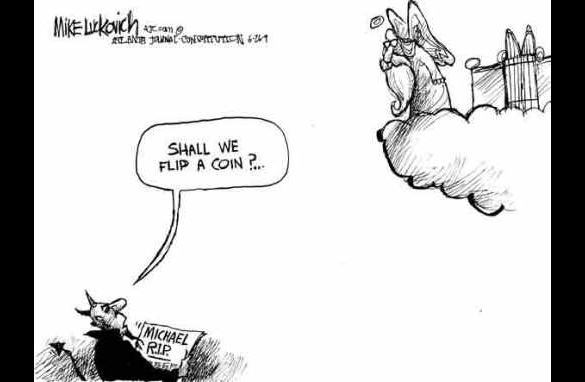 Michael Jackson, the "King of Pop" who was preparing for a comeback tour, died yesterday. He was 50. Send us your thoughts and memories about the pop icon.