What the #$*&? Drinking and cursing good for your health!?

Drinking might stave off Alzheimer’s, and cursing might increase your tolerance to pain. Who knew! Senior medical correspondent Elizabeth Cohen has the details on two new studies.

On a recent CNN Empowered Me! Friday segment, we had advice for patients who have been charged for missed doctors appointments  [see the video: The high cost of Standing up your doctor]. We got quite the response, from both patients and doctors! We would love to give doctors the opportunity to respond to the #1 question we had from viewers.

Many wanted to know, what recourse does a patient have when a physician is running significantly late for an appointment?  Many viewers argued that their time is equally as valuable as the doctors.  Some wondered if their next appointment should be free if they come in for an 11am appointment but aren’t seen until 1pm. How would you address these concerns? Has your practice developed a policy that might offer a good solution?

Our request is directed at doctors, but if anyone else out there has thoughts, we'd love to hear from you as well!  Just shoot us an email at empoweredpatient@cnn.com.

The leader of the Nation of Islam talks at length with CNN's Don Lemon about Michael Jackson and the ongoing struggle for racial identity in America.

Booze for the Brain

You’ve probably heard a glass of wine is good for the heart, and now a new study shows drinking may also help stave off dementia as well.

Researchers at Wake Forest University School of Medicine in North Carolina asked senior citizens how often they drank alcoholic beverages. After following the 3,069 study subjects for six years, the researchers found that those who had a drink or two a day were 40 percent less likely to develop Alzheimer’s disease and other forms of dementia compared to senior citizens who didn’t drink at all or drank more than an average of two drinks a day. It didn’t matter what type of alcohol the senior citizens drank.

“We were excited to see that even in older adults, moderate alcohol intake decreases the risk of dementia,” said Dr. Kaycee Sink, a geriatrician and senior author of the paper, which is being presented Monday in Vienna at an Alzheimer’s Association conference. “As of yet, we still have no cure for Alzheimer’s disease and other dementias, so it is important to look for things that might help people prevent the disease.”

Drinking, however, was harmful for the senior citizens who started the study with mild cognitive impairment. For this group, consumption of alcohol in any amount was associated with faster rates of cognitive decline.

Dr. Laurel Coleman, a geriatrician in Maine and a member of the Board of Directors of the Alzheimer’s Association, who was not involved in the research, said the study is significant.

“A 40 percent lower risk of dementia is a meaningful change,” Coleman said. “This is really big.” She added more research needs to be done to determine why alcohol might stave off dementia.

The buzz today is all about Sonia Sotomayor as she begins her confirmation hearings. 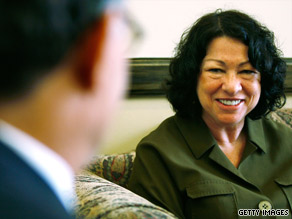 Sources close to the Supreme Court nominee say she has been spending recent weeks prepping in a tiny, plain office in the Eisenhower Office Building next door to the West Wing of the White House, reviewing material and answering test questions. Republicans say they plan to question Sotomayor about her views on affirmative action, gun rights and whether her Latina heritage would unfairly affect her judicial rulings.

What would you ask her? If you were given the chance to throw a question her way, what would it be? Let us know by adding your comment below. We’ll read some of them on-air later in the show.