Not Quite a Little Red Corvette...

Automakers are busy developing electric cars, hoping they may be the wave of the future. Some electric cars are already on the market - though they might not be the answer to all your driving needs. Our Josh Levs took one for spin.

Join Josh along with Betty Nguyen, TJ Holmes and Reynolds Wolf weekend mornings in the CNN Newsroom, 6am ET/3am PT.

President Obama met with Pope Benedict XVI last Friday at the Vatican. While they agreed on helping the poor and pushing for Middle East peace, the gift the Pope gave the President Obama was meant to underscore his views on what the Vatican considers prime ethical issues.

In case you missed it Sunday morning in the CNN Newsroom, here's CNN Sr. Vatican analyst John Allen with his perspective what made this meeting so significant between these two powerful leaders.

We're focusing on Health Care!
Congress is working on several bills for health care reform.
We want to hear from you.
What do you have to have in your health care plan?
Should the government mandate health coverage?
Do you support a public option?
Who should pay?
Send me your thoughts!

Fixing computers a world away

Seth Owusu is a computer technician for Geek Squad, the computer repair team in the Best Buy Stores. It is after his long work days fixing computers, that he makes his greatest repair. Seth runs Entire Village Computer Organization (EVCO), a charity that refurbishes computers and delivers them to schools in Ghana. And much like the 3 year warranties offered at electronic stores, Seth and his team make a 3 year commitment to keep the computers up and running.

Seth Owusu grew up in Ghana, and was deeply touched by missionaries visiting his school, who were willing to travel so far to help strangers. After relocating to the United States he founded EVCO, picking up donated computers, and refurbishing them in his garage and basement. The extra hours and hard work are validated with each trip to Africa, where he has seen improvement in the villages that have received his donations, with greater attendance in the schools and a higher interest in education. EVCO has donated 120 computers thus far, in Ghana and now also Nigeria. They plan to add one additional country to their program each year.

For Seth, he is able to build something greater than a line of working computers. He is able to help build a brighter future for the children in these schools.

To learn more about EVCO and other organizations that are helping children, please visit our Impact Your World page.

Afternoon high temperatures will drop by almost 20 degrees in portions of the central and southern Plains by Saturday. Triple digit temperatures in Oklahoma City, Dallas and Tulsa will give way to afternoon highs in the low- to mid-80s this weekend.

There’s a slight risk of severe storms along a cold front extending from the mid-Mississippi River Valley westward into the central and southern Plains. Damaging thunderstorm wind gusts and large hail will accompany the stronger storms and an isolated tornado or two can’t be ruled out.

The tropics are quiet in the Atlantic. However, the eastern Pacific Basin is active with two named tropical cyclones – Tropical depression Carlos and Tropical Storm Dolores. Both storms are not expected to threaten land and will remain in the open waters of the Pacific until they dissipate. 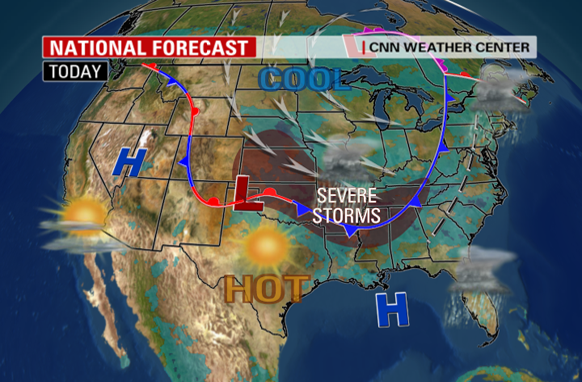