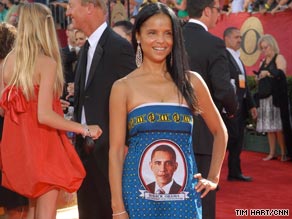 There are always 2 shows at the Emmys. The actual progam and the red carpet.

Should actors wear their politics on their sleeve or on their whole body, for that matter?

After eight years, has the United States given enough in blood and treasure to defeat Al Qaeda and establish a new government in Afghanistan? In a document obtained by the Washington Post, the man in charge of the war, Gen. Stanley McChrystal, says we have 12 months to get more boots on the ground – thousands more – or the U.S. faces “failure.”

As the British government rethinks it commitment to Afghanistan and Italy buries six of its soldiers killed there, public sentiment in coalition countries and the U.S. is slipping dramatically.

What do you think? Is it time for a full U.S. withdrawal from Afghanistan?

Leave us a comment. We'll share some of them on air in the CNN Newsroom, 11am-1pm ET.