Tennis Benefits from the Long Game

42,000 tennis balls are used every year at the Wimbledon tournament.  This year, John Isner and Nicolas Mahut seemingly used that many balls in a single match.

The epic battle was so long, the U.S.’ national debt increased $1.7 billion in the 11 hours and five minutes the match was played, according to economists and their calculators.  But as interest piqued over the three-day contest, Isner and Mahut generated invaluable media coverage for themselves, for Wimbledon, and for tennis, upstaging the World Cup and Queen Elizabeth II, visiting the All England Club for the first time in 33 years.  For three days, Wimbledon was the star of the sporting world.

Think U.S. soccer is excited about our “newfound” interest in the World Cup?  The United States Tennis Association has to be doubly thrilled about last week’s marathon match.  The USTA and tennis enthusiasts across the United.States have been buoyed by the ever-growing tennis involvement in this country.  In 2009, according to the USTA, tennis participation topped 30 million players for the first time in 30 years, growing in all age groups across the board and all ethnicities, with African American participation up 19 percent and Hispanic play up 32 percent.  Those numbers leave soccer gasping in the crease – and golf isn’t even in the same stadium.  Exposure like Isner and Mahut provided tennis is another ace for the sport.

From the start of Wimbledon through the final day of the Mahut match, Isner gained 18,000 followers on Twitter.  The match itself was one of the most searched items on Google.  Even sponsors got a big return on investment.  According to Front Row Analytics, TV exposure was worth $345,000 to Lacoste, $621,000 to Prince, and $1.17 million for Nike.  Nike could have earned another $900,000 had Isner worn his hat straight.

And while one player had to lose the match, they’re both winners off the court.  Before the score was settled, agents for each player were fielding new endorsement opportunities.  I wonder who will be the first to back an everlasting battery, long-lasting deodorant, or a high mileage hybrid car.

More than the financial gains, or jumps in viewership or sports participation, America really needs this feel-good story right now – at least for a few hours, we were able to put aside the Gulf oil spill, the fired general and unstable situation in Afghanistan, the stubborn national 10 percent unemployment rate.  Three days later, we’re still talking about Isner’s and Mahut’s marathon match.  Their performance and undying will are exactly the kind of respite on a changeover we need this summer.

Rick Horrow is the CNN Sports Business Analyst and co-author of Beyond the Box Score: An Insider’s Guide to the $750 Billion Business of Sports

Residents in the Gulf are fighting for their lives, as oil seeps closer to their shores and businesses begin to close their doors. Meanwhile, nearly 9,000 miles away in the central Indian town of Bhopal, hundreds of thousands feel their pain. After all, in 1984, they went through something similar, but much more severe.

In December 1984, toxic chemicals leaked from a pesticide plant in which an American-owned company, Union Carbide Corporation, held a majority stake. A noxious cloud engulfed much of the town. Hundreds of thousands frantically ran into the streets. Thousands died in the night. Thousands more died in the days, months and years after. The victims' families say nearly 20,000 have perished from related illnesses.

Astonishingly, a quarter of a century later, 390 tons of toxic waste still lies on the now-defunct plant site. There is no safe way to dispose of it, so it leaks into the groundwater, which many in the region depend on. Cancer and other diseases are rampant in the area, so the effect is generational.

As they watch the tragedy unfold in the Gulf, residents of Bhopal wish Union Carbide would receive just a fraction of the backlash BP has, or give up just a fraction of the cash. $20 billion is a lot of rupees. The company paid the Indian government $470 million to compensate more than half a million victims. They've made no sweeping efforts to clean up the waste and the now-crippled local environment.

Dow Chemical Co. (the company that owns Union Carbide) says the 1989 out-of-court settlement transferred all clean-up and recovery responsibilities to Madhya Pradesh, the province in which Bhopal resides.  The U.S. didn't let BP run and hide, but India let Union Carbide off the hook.

The Indian government recently approved a $270 million aid package to compensate the victims. But that money will go to just 42,000 of the almost 600,000 victims in Bhopal.

The parallels between the tragedies in the Gulf and in Bhopal are quite amazing. However, while many say BP and the federal government have been slow to respond to the oil spill, Union Carbide has been entirely absent from Bhopal and somehow, without repercussion, has managed to shift responsibility onto the Indians.

Tired of the "same ole, same ole?'  Maybe it's time to make some major life changes.  CNN"s Fredricka Whitfield talks to brand manager and marketing expert,  Peter Arnell, about his own personal transformation.

Summer is usually a time for teenagers to get off the couch, get a summer job, and start to learn how to make  a living.   But it might be more difficult to do that this year because of the financial crisis and large number of people out of work.

But don't give up - there are ways to find a summer job.  CNN's Fredricka Whitfield talks to Sharon Lechter, author of the book "Three Feet from Gold," and head of the financial education group "Pay Your Family First."

What's Playing at the Movies

We add two new movies to the summer movie marquee.  CNN's Fredricka Whitfield gets the 411 from Ben Mankiewicz, host of Turner Classic Movies, and film critic for "What the Flick" on The-Young-Turks-Dot-Com.

TJ Holmes' Weekend in the Gulf 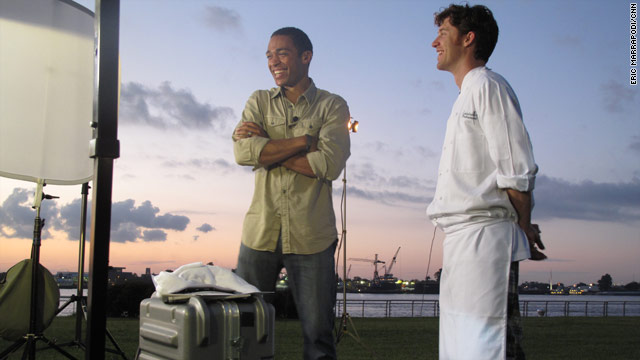 Just looking at New Orleans, you wouldn't think a disaster was upon us. A walk along the river is still picturesque. Canal, Bourbon, and Frenchmen streets are still jumping until 5 a.m. Again, just looking at the New Orleans, you wouldn't think anything was wrong. But, start talking to people in New Orleans, and it's clear that something is terribly wrong. Two of the biggest disasters in this country's history have happened within 5 years of each other and happened to the same region. You could easily see Katrina's devastation, but you've got to talk to people to get a real sense of the oil devastation. Every conversation I have had during my weekend trip to New Orleans was in some way a demonstration of the toll the leaking oil is having.

Here are just a few of the people I met:

A cab driver who actually moved to New Orleans from New York after 9/11. At the time, he was hoping to escape a city so devastated by disaster. He's now questioning his decision to relocate.

A fisherman who has been doing it for 40 years who described fishing these days as "fighting for scraps."

A Vietnamese crab manufacturer who has been in the fishing industry since he came to the country in the mid-70's. He's closing his business Sunday because the area where he gets his supply of seafood is now closed to fishing. He has no idea what else he can do for a living.

And, a man who was born and raised in New Orleans who summed it up this way: "I don't know what our ancestors did to piss off the Gods, but we're paying for it now."

And, I promised another local I would pass his message along. He reminded me that after 9/11, Americans were asked to visit New York to spend money and support the city. He said New Orleans and the Gulf Coast need you to now visit them.

I have always loved this city, just like a lot of other folks. But, watching how this city keeps bouncing back from disaster, makes you love it even more.

A Fight for Survival

Vietnamese fishermen fear hard-won livelihoods won't be able to survive both Hurricane Katrina and the BP oil disaster in the Gulf of Mexico. They came here seeking refuge, but the past few years have brought unexpected hardship to the tightly knit Vietnamese fishing community.