Who are the most intriguing people of 2012? You tell us.
With this interactive feature, you vote. We'll announce the "winners." The list includes controversial leaders, a fallen hero, one of the highest paid TV actresses, a stunningly successful author, a statistician, a guy who took a heck of a leap - and, oh yeah, the president and the man who ran to replace him. Among many others.
Photos tell the stories of 2012 - including many you may have missed - in a powerful way. Be sure to check out "the year in pictures."
Sports fans should also see 75 amazing sports moments you missed this year. (At least we're guessing you may have.)
Want to share your videos, photos, or thoughts on 2012? Visit CNN iReport. We'd especially love "your best 2012 weather photo."
Here's to a big, beautiful 2013.
JL
P.S. See you on the air in a few minutes.

Americans aren't buying it - literally! Americans expect the economy to get even worse, according to a survey released by Harris Interactive. The Harris poll reveals Americans saving more since February of this year in more ways then one. With no expectations of recovery in sight, many are buckling down to cut costs and save in every way possible.

Over three quarters (67%) of Americans are buying more generic brands, the highest number reported doing so in two years. Almost half of Americans are packing their lunch and making fewer trips to the hair stylist, while 1 in 5 Americans have stopped buying a morning coffee.

Take a look at how many Americans are changing their lifestyles to save on expenses at CNN iReport.

Are you saving in any of these 10 ways? Has cutting back changed your life?

CNN wants to hear YOUR story.

In today's Globe Trekking segment, we spoke to CNN iReporter Johnny Colt.  You may recognize him as the former bassist of The Black Crowes and Train.

To check out his many iReports from all over the world, click here.

Mom in the U.S. Agonizes over Her Kids in Haiti

Like many Americans, I am heartbroken over the devastation and tragic stories coming out of Port au Prince and I want to help. So, instead of being the typical meteorologist today, I have been working the CNN Haiti Missing Desk in an effort to reconnect families. I have been poring through www.cnn.com/haitimissing and talking with people who are still searching for loved ones, and others who have found them, but still need help. I was privileged to speak with Cassandre Lorvanis. She is a Haitian native who has been living and working in Massachusetts for the past six years. Her three children have thankfully been found OK, but her fiancé is missing and presumed dead. A neighbor in Port au Prince is currently watching her children, ages 23 months, 8 years and 10 years, but says she can’t care for them any longer as there is no food, water or shelter. Lorvanis is desperately trying to find a way to get them to the U.S. Here is her story…

iReport: Your thoughts on climate change

The demand for answers continues as world climate-change leaders gather in Copenhagen for a summit on climate change.

On Monday, the EPA released a statement saying greenhouse gas emissions pose a threat to public health and welfare.

But a new CNN poll finds that while most Americans believe that global warming is a proven fact, the number who think that climate change is due to man-made emissions has fallen below 50%. We want to hear your views on global warming.

Post your iReport video responses and we'll show some during CNN Newsroom. 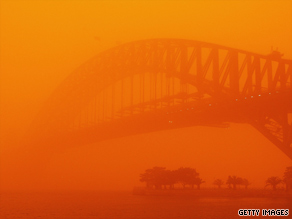 Tire falls from the sky

iReporter Jason Miller says a tire from a helicopter-plane collision over the Hudson River landed on the road near him.

He told CNN's Josh Levs what he saw.

The arrest of prominent black Harvard University professor Henry Louis Gates Jr. has spurred a passionate discussion in the media over race relations in America. Gates was arrested for disorderly conduct after an exchange with an officer who was investigating a possible break-in at Gates' home.

Have you been a victim of racial profiling? What was the experience like?

And if you work in law enforcement, we want to hear from you: What challenges do you face while policing diverse communities? What are your thoughts on Gates' arrest?

Share your personal stories on video and you could be featured on CNN.

[cnn-photo-caption image=http://i2.cdn.turner.com/cnn/2009/SHOWBIZ/TV/06/25/obit.fawcett/art.fawcett.portrait.gi.jpg caption="'70s icon turned serious actress Farrah Fawcett passed away Thursday at age 62 after battling cancer"] She had a million megawatt smile that set male hearts aflutter as they hung her iconic swimsuit poster on their bedroom wall and a fabulous head of hair that sent a generation of women scurrying to the salon to copy her winged 'do.

Actress and artist Farrah Fawcett has died after a very public battle with cancer. Share your memories of the "Charlie's Angel" who went on to garner award nominations for serious roles in "The Burning Bed" and "Extremities." Post your comments below or send us your thoughts in an iReport.

Tensions are rising at the University of Notre Dame.  Many Catholics are angry that President Obama will be giving the commencement speech because of his positions on abortion and stem cell research.  Some clergy members are boycotting, many students are upset and anti-abortion activists have protested around the school's campus in South Bend, Indiana.

CNN will be covering the speech live on Sunday afternoon and we want to hear your opinion.  Was the Catholic University wrong to invite Obama to speak at their graduation ceremony?  Should the President be welcomed regardless of what he supports politically?

Get in front of a camera and share your opinion on iReport, we may just use your video on air!!